James Morrison’s work has been defined by his childhood growing up in the lushness of the rainforests of Papua New Guinea. The works are densely patterned and often include almost magical imagery of flora and fauna. There is a combination of mythology, fable and bush lore in these minutely rendered works. They are simply gorgeous works to own. 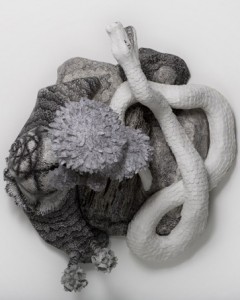